Stocks Take the Stairs Up and Elevator Down

Home / Blog / Stocks Take the Stairs Up and Elevator Down

Stocks Take the Stairs Up and Elevator Down

It would have been nice if they waited a bit longer but last week reminded us again that stocks tend to drop significantly faster than they rise. Much to our gut-wrenching dismay, the market often takes the stairs up and the elevator down. 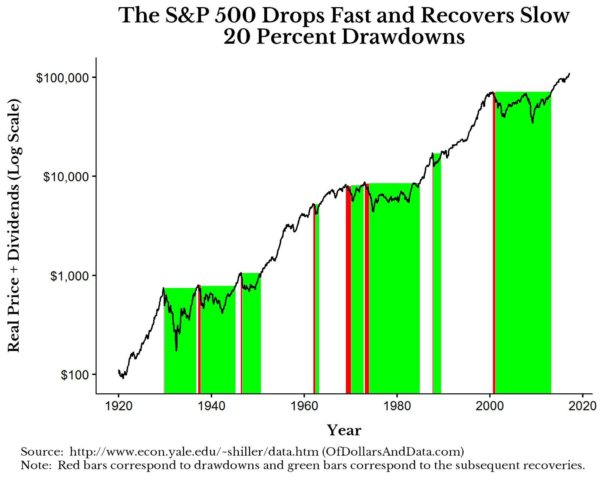 In both instances, there is a real hurry to liquidate before things get out of control. People sell as quickly as they can and supply dwarfs demand. It begins to snowball and prices drop very fast.

So, what do we do about it?

At this point, studies suggest not to do much. While we never know for sure, the data says to hold on. In fact, Seeking Alpha says it could be “devastating to a portfolio” if you decide otherwise.

The problem with trying to time the market is that you have to be right twice. Once on when to get out and once on when to get back in. The figure below shows the results of a strategy that sells the S&P 500 after a 5% pullback from the peak and only buys back in once the markets have calmed down. The study uses 2% above the sell price to identify that the coast is clear. 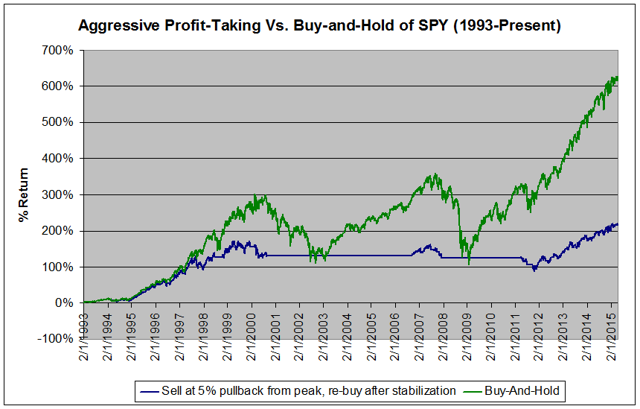 This year’s uneven start has been particularly frustrating due to bond’s lackluster performance. Where you might expect a pick-me-up, we aren’t seeing it. The US Aggregate Index Fund (AGG) has declined as well to the tune of roughly 2%. We have rising rates and inflation to thank for that.

However, the silver-lining here is that the bond indexes you continue to hold now have a higher yield and will pay more income moving forward. This is a great thing, especially for retirees. If you are still working, your ongoing contributions each paycheck are improving your average cost across both asset classes. And lastly, the stocks you continue to hold will kick off dividends that can be reinvested automatically at lower prices. This is an opportunity for everyone.

With that said, there is no sugar coating a steep drop in portfolio values. I find solace in knowing that we are evidence-based investors. Near-term market movements are unpredictable and noisy. Trades in our portfolios will be made based on data like the study presented today and not psychology or our feelings about the market.