Success Is Hard to Come by With Active Management

Home / Blog / Success Is Hard to Come by With Active Management

Success Is Hard to Come by With Active Management

For decades, it has been Wall Street’s best-kept secret that actively managed funds typically generate worse returns than their benchmark. Every year there are research studies done to measure portfolio managers’ effectiveness, and every year the results tell the same story. On average, active management costs but it does not pay.

Here’s the year-end 2016 report from Morningstar showing the success rate of active funds: 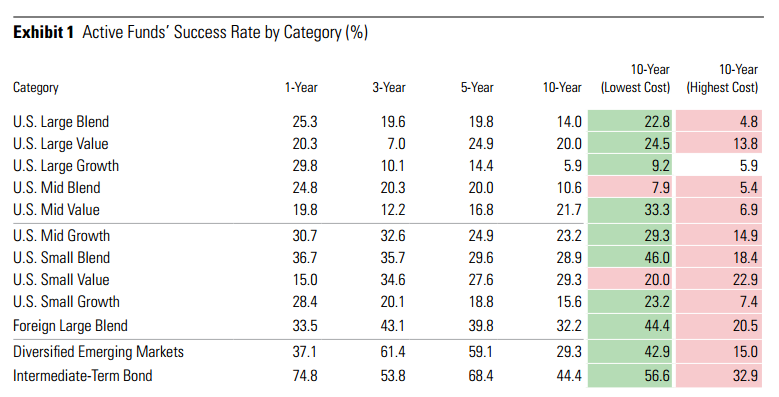 Source: Morningstar. Data and calculations as of 12/31/16

If you don’t like reading charts, just try their key takeaways on for size:

It’s no wonder the average investor’s returns lag even below inflation! 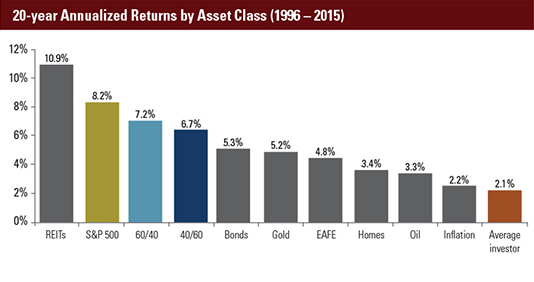 So, why are active managers mostly unsuccessful? We propose a number of reasons.

First off, they cost more money. Actively managed funds have a higher expense ratio, which raises the hurdle rate to profit—not to mention excess gains, known as alpha. 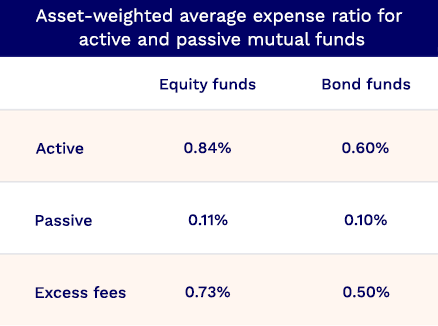 Additionally, if you are making trades instead of holding indexes, you will pay commissions and other forms of transaction costs. Of course while doing so, you can’t always get the exact price you want because there is someone on the other end of the trade haggling for a better execution. This means price slippage. And perhaps most importantly, if you are operating outside of an IRA or qualified plan, there are tax consequences that could result in capital gains paid. Put it all together, and the deck is stacked against you right from the get-go and before you even choose an investment.

Beyond that, the vast majority of active managers are stock pickers. And unfortunately for their sake, the vast majority of stocks aren’t the reason markets move higher. A few stocks are generally responsible for overall market gains. If you aren’t invested in one of those select high-flyers, you just missed out. Ben Carlson on Bloomberg notes the following:

While the amount of money invested in active funds still dwarfs passive index funds, things do seem to be changing. Take a look at where investors’ money has been flowing the last ten years: 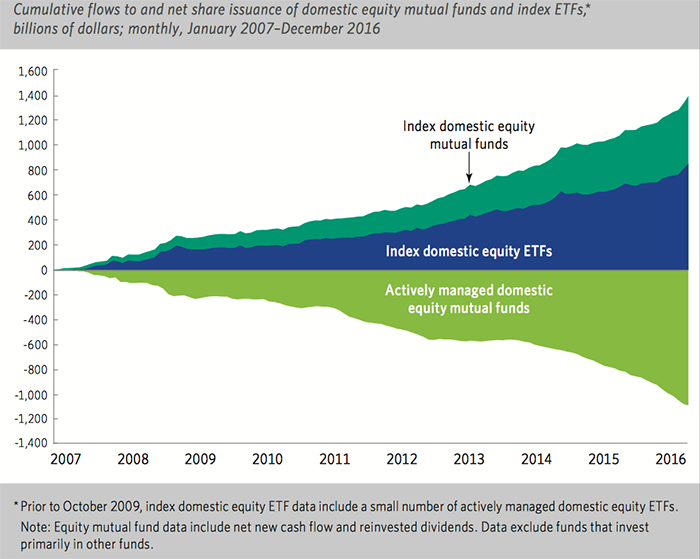 It’s probably safe to say that the secret is out. With the fiduciary rule knocking on the door of implementation, we expect this trend to continue and at an even faster rate. After all, it’s a lot harder to justify a higher-cost product that has historically performed worse for your clients.

At MarketStrats, we only use low-cost passive index ETFs for our asset allocation models. However, we do believe active management has a place in many people’s portfolios. We painted active management with a very broad brush in this post. In our next post, we will give you a look behind the scenes at the type of tactical strategies that have had a bit more success historically.